I expected to come back from San Francisco Comic Con 2017 with some good shots, but I got more out of it than that. It was a lot of fun to talk with the people there, see the comic art exhibits, learn about the sci fi characters,  and essentially be a visitor to this subculture’s alternate reality for a day. It’s a great event for photographers because the people dressed in costumes like and expect to have their photo taken and like to pose.

I shot with my monochrome camera and without flash. I had two primes, a 28mm and a 50mm and the 28 was more useful because I could show more of the scene and do environmental portraits, like this, which is my favorite shot from the day. This is Harley Quinn and the Joker in the entrance lobby.

As always  on my photo excursions, I did some things right and some wrong. One thing I did right was talking with people and asking them to pose for me. That always resulted in better portraits than trying to get “stolen” shots. Here’s Beetlejuice. She had a lot of personality, in case you couldn’t tell. 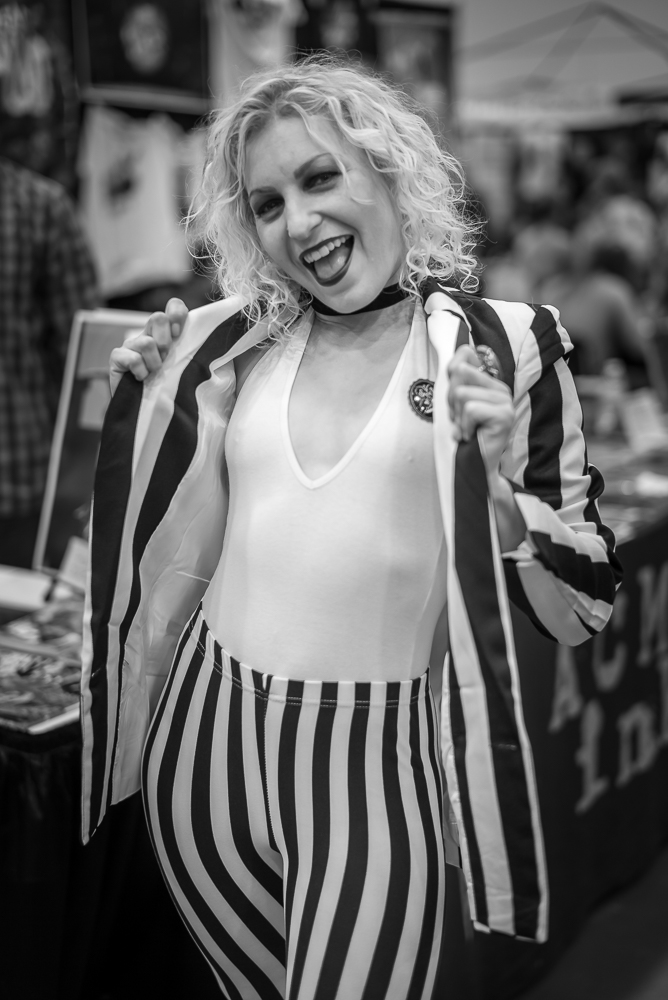 Two big things I did wrong over and over were not paying enough attention to backgrounds and not getting close enough to my subjects. Here, I did get close enough to Darth Maul. 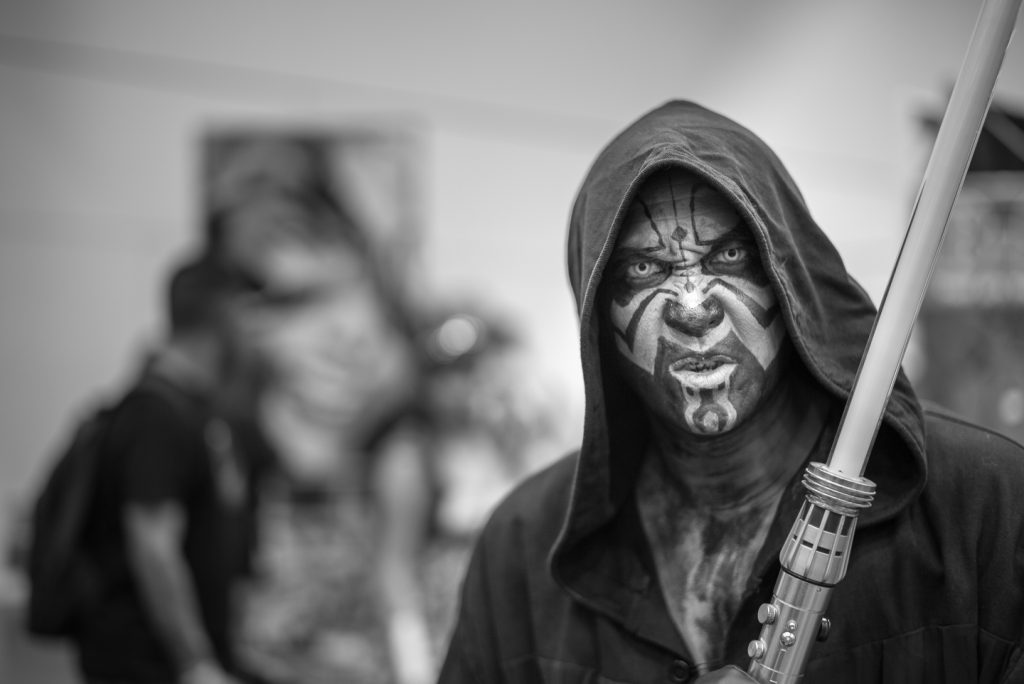 And here, I did pay attention to the background. I stood in front of this curtain until a good subject, like these Day of the Dead characters, came along. 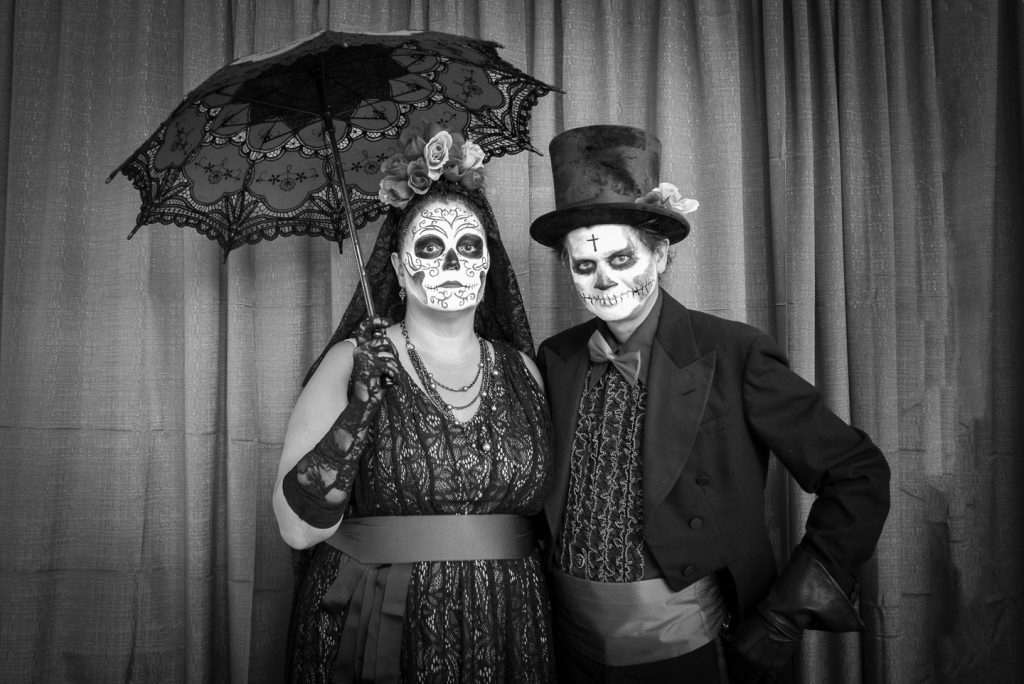 This is Bunny Page, which I know because she gave me her card after I took her photo. Her card says she’s an Alt. Model and Cosplayer. It showed; she had a terrific costume and knew how to pose. 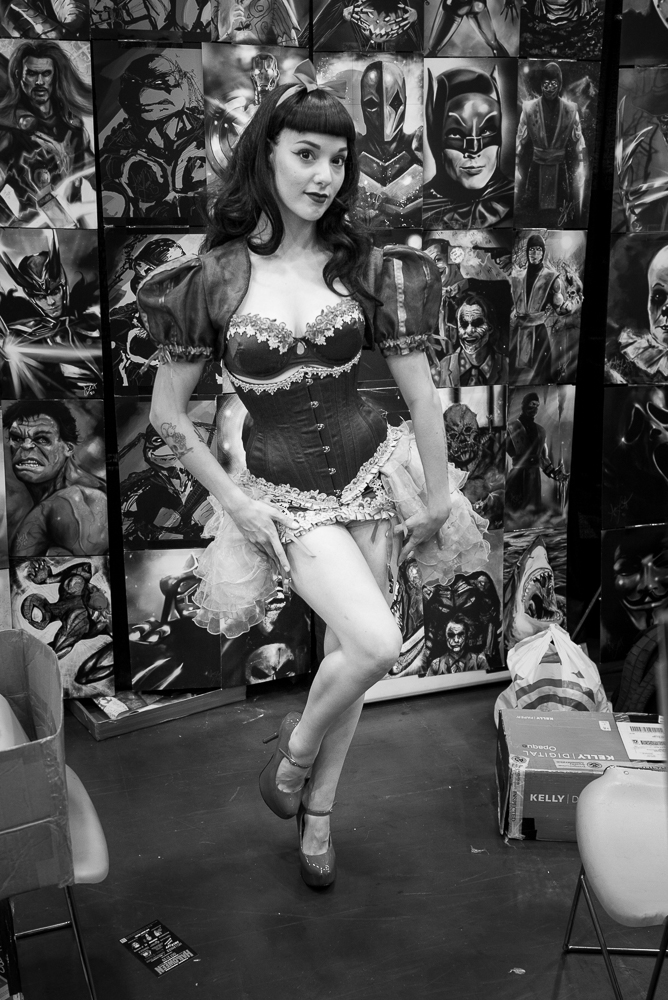 I got many more images I like but don’t ever want to put too many in one post because they start to lose their impact. But it’s such a goldmine, I have photos to work on for a while. And one other lesson I learned is that I could have done better if I’d gone back a second day and put into practice what I learned the first day. So next year, I plan to go to two days of the three-day event and get better shots on day 2 than I got on day one. Wish I’d done that this year.