Even though I said I wasn’t going to be a den mother for the field trip to Fort Point next Sunday, December 5, I felt I should still go there and gather some useful info for our visit.

I’ve been there three times before, so there wasn’t a lot new. But I’ve included some tips and photos here so you can get an idea of what’s there and how to plan your day. You can also visit the official government website.

I leave Orinda early, about 7 a.m., to miss any traffic. I don’t go through San Francisco; instead, I go over the Richmond bridge, then take 101 South over the Golden Gate Bridge. It’s longer, but scenic and less stressful, and when you get off the bridge, you take an immediate right and you’re in the Presidio, very close to Fort Point. (If you go this route, get in the far right lane before you exit the bridge and take a sharp right immediately after going through the toll plaza.)

Fort Point doesn’t open till 10 a.m., and I’m in the city by 8, so I almost always head to the nearby Palace of Fine Arts—one of the most beautiful buildings in the city. There’s hardly anyone there at that hour on a Sunday morning, and you can park on the street right next to the palace. The structures face east, and are beautifully illuminated by the rising sun. Here are a few photos I took yesterday. It’s such a great subject that I photograph it in color, black and white, and infrared. 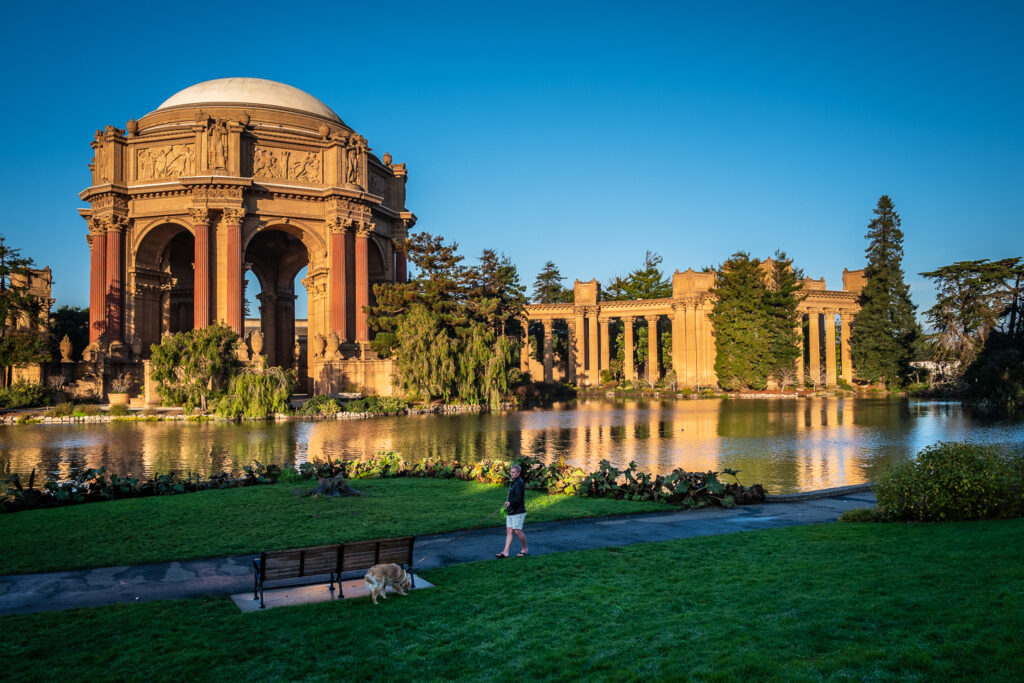 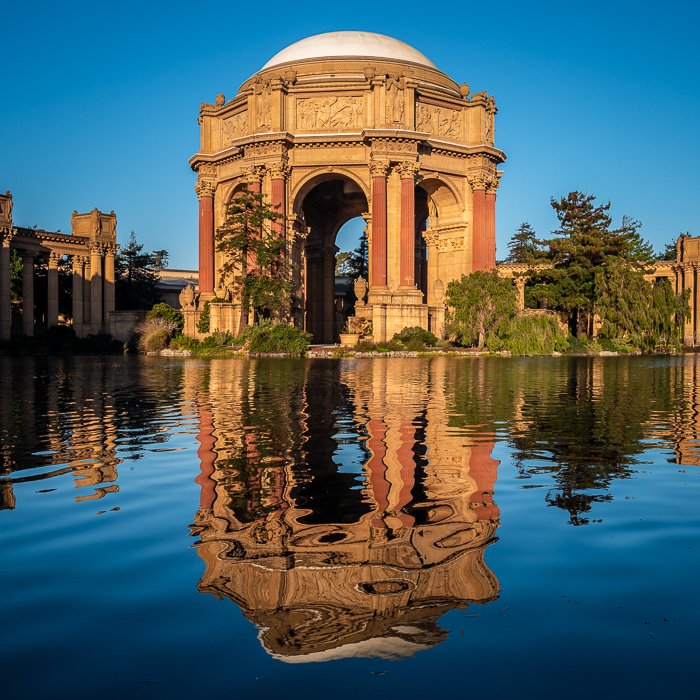 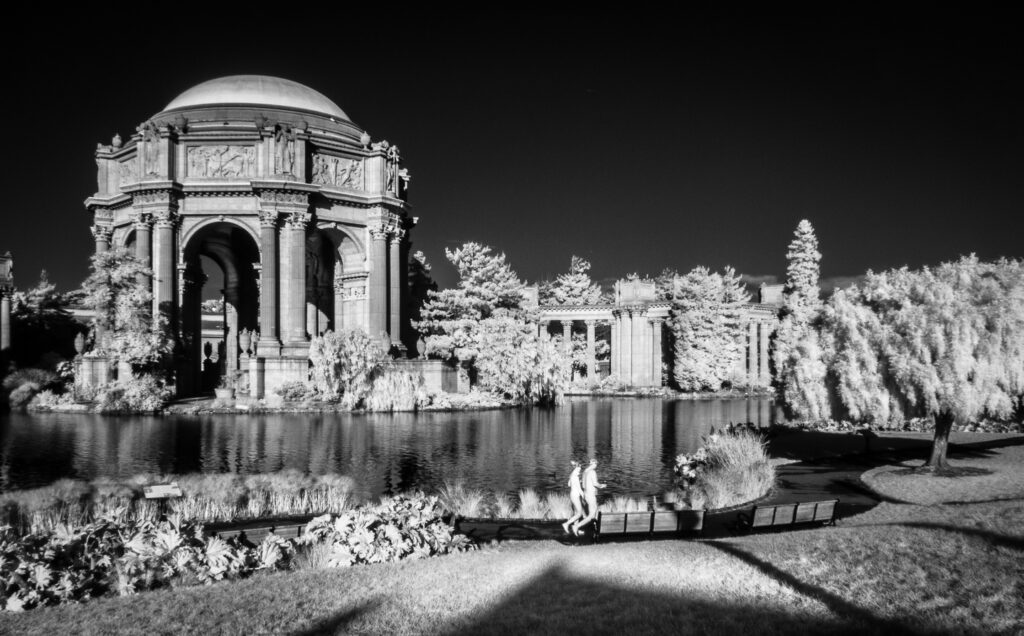 Then you can head to Fort Point, which is about a 10-minute drive, and park right next to the fort. There was plenty of parking when I got there around 9:30 this past Sunday (and it’s free), and there was even plenty of parking when I left around 1 p.m. Where else can you find that in San Francisco! There were only a half-dozen or so people in the fort when I entered just after 10 and it never got even remotely crowded.

Here’s Fort Point, beneath the south anchorage of the bridge. 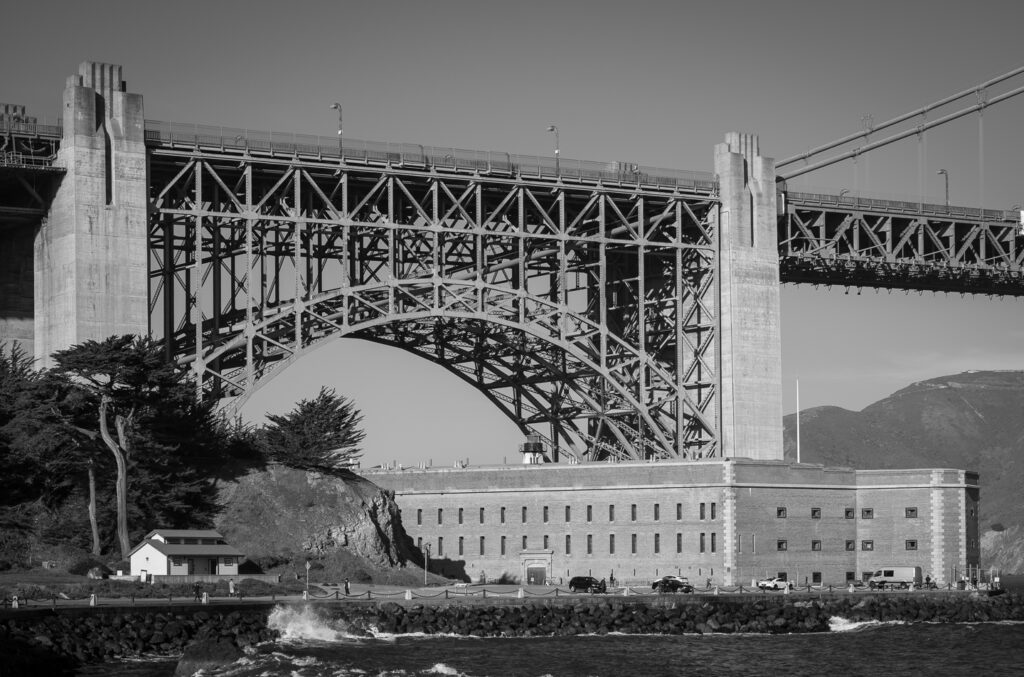 If you get there well before 10—and I recommend that—you can walk along the waterfront to the Warming Hut, which is about a third of a mile from Fort Point, away from the bridge. At the hut, you can get coffee and buy food and souvenirs. Note: The store that used to be in Fort Point is now permanently closed. The merchandise you used to be able to get there is now at the hut.

There are obviously great vistas of the bridge from the walkway, like this:

If you walk out onto the fishing pier just past the hut,  you’ll get a different angle on the bridge.

You can then walk back to the entrance to the fort and meet up with the group a little before 10. Entrance is free, but you need to wear a mask. Much of the time in the fort, you’ll be outdoors, or almost outdoors, so I think the masks are overkill, but I understand that it’s a federal facility and they have to be cautious.

The fort was built in the time of the Civil War, so the Park Service has employees in the fort dressed in period costumes who play the part of people from that time and talk to you in character. Here’s one woman I talked with for a while. (Wish she didn’t have a mask on.)

Inside the fort, you’ll find many really great locations and subjects. The light on the brick walls and passageways makes for beautiful monochrome images. (Also unique backgrounds for models.) Here are some examples from yesterday. 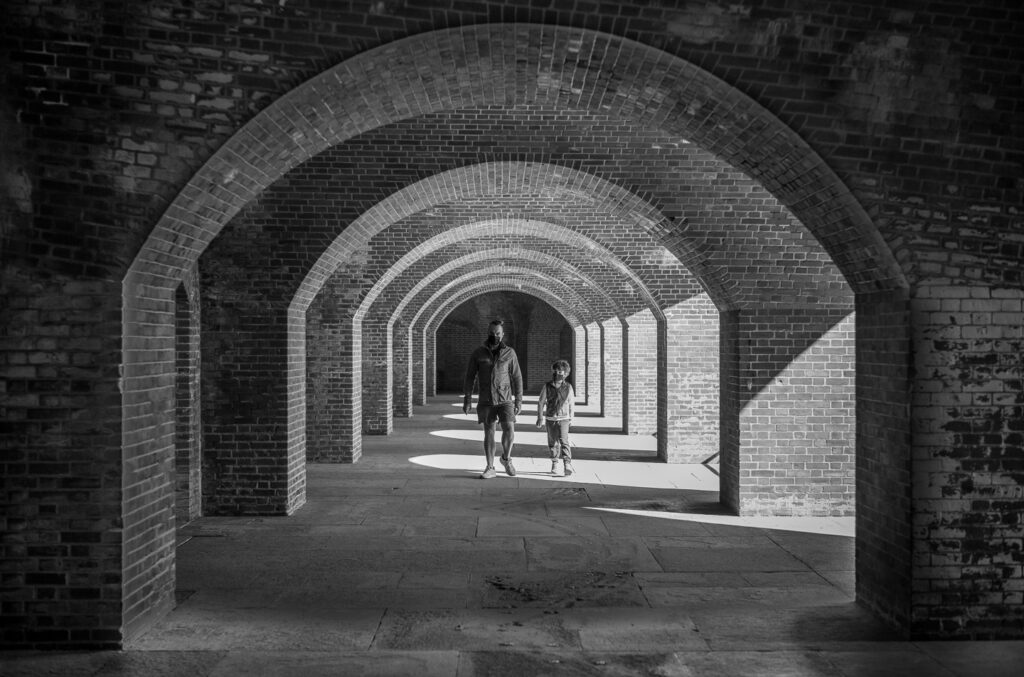 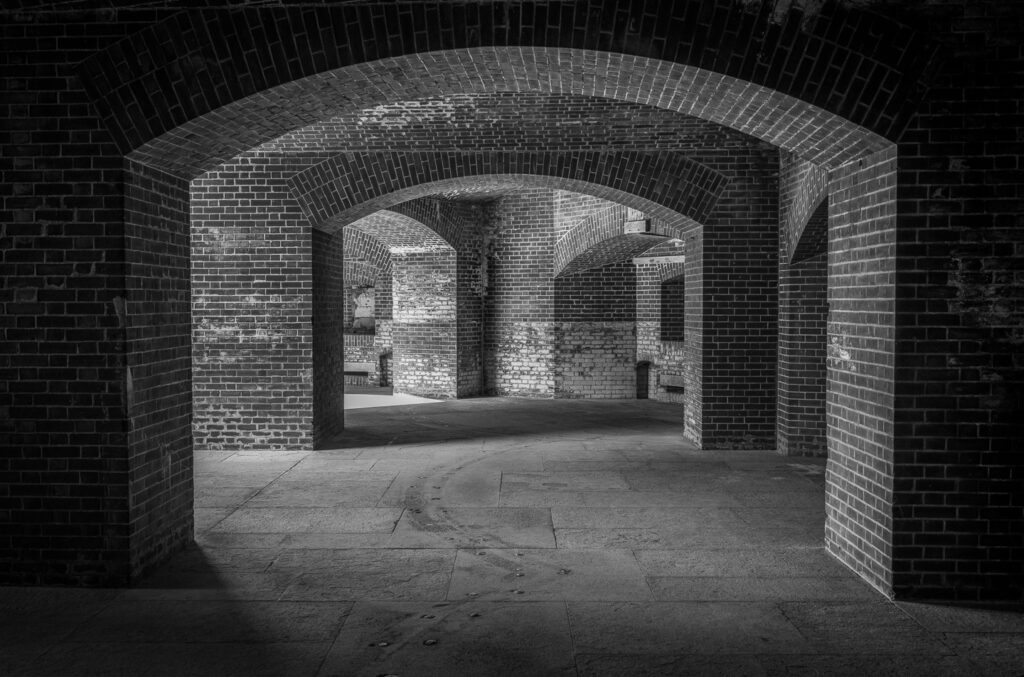 If you like black and white portraiture, there’s a gallery in two rooms of portraits of people who work on and staff the Golden Gate Bridge. They’re excellent. This is a section of one room. 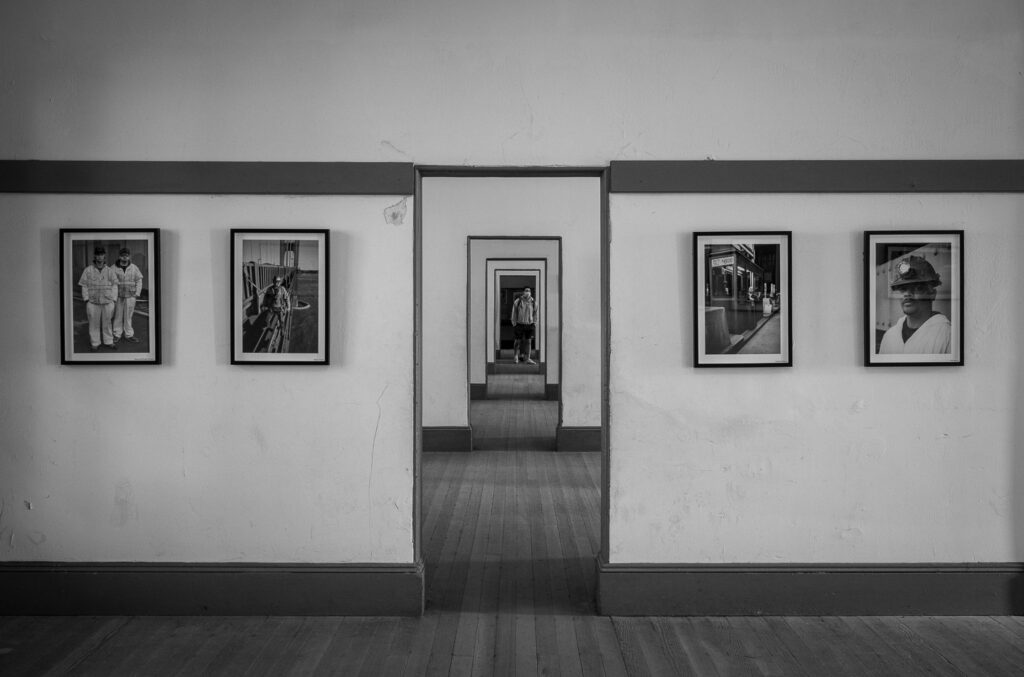 Also, the hallway you see in the shot above is one of the iconic shots at Fort Point. You are required to capture it. It’s at the east end of the second floor. Here it is: 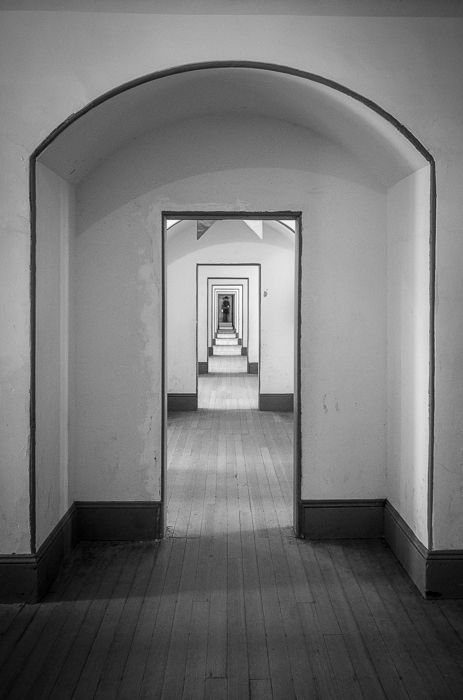 As far as equipment, here’s my personal advice, but, of course, you should do what you want. Wide-angle lenses work best. The longest lens I shot with was a 50mm, and I rarely used that. Most shots were at 35mm. Even wider also works well. I did not bring a tripod or a flash—but I don’t see anything on the fort’s website that says you can’t use them. Even though it was a sunny day, it can be dark in some of the corridors. But I just let my ISO float and it was never a problem. I did do a couple of HDRs when the difference between the bright areas and dark areas was extreme, but I’m not convinced they were necessary.

If you want to stay and eat lunch in the Presidio, there are a couple of restaurants, but frankly, it’s probably easier to just bring a sandwich and go to the main Parade lawn and eat outside.

So, I’ll see you all a little before 10 next Sunday at the entrance to the fort.